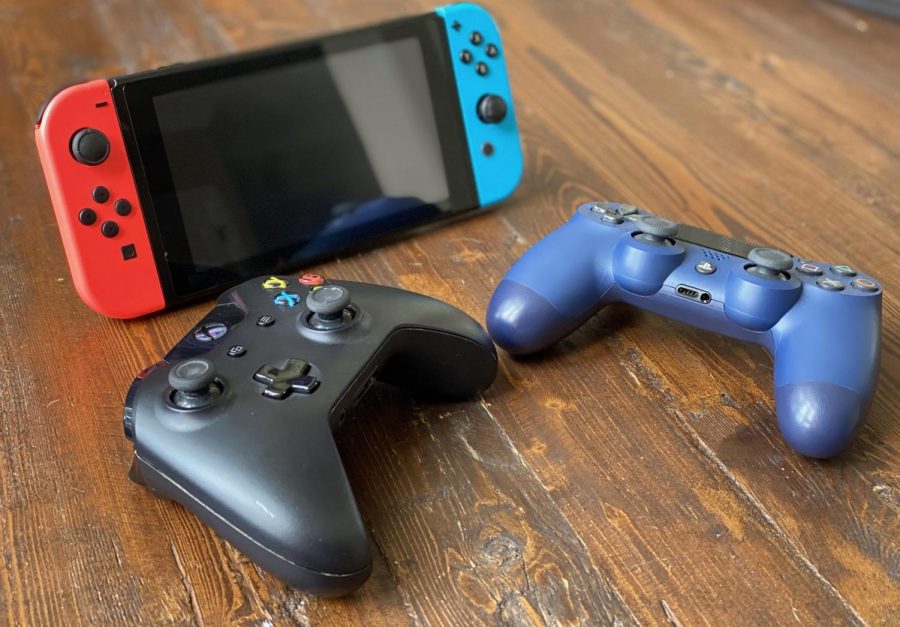 The argument of which console reigns superior is still a highly debated topic amongst teens and young adults across the country.

Video games have been an integral form of entertainment since 1972 arcade game Pong, which is one of the first mainstream video games to ever be released. By today’s standards, Pong is primitive, a simple game of tennis between two white bars. Its impact on gaming, however, was anything but that. Pong marked the very beginning of the video game industry, and still stands strong today as the start of an era.

Over the years since then, the video game market has changed drastically. The three major competitors have released several iterations of video game consoles through the years, including the timeless Xbox 360, PlayStation 2, and Nintendo Wii among others.

Current console incarnations are the Nintendo Switch, Xbox One, and Playstation 4, the latter two of which are upgrading to the Xbox Series X and PlayStation 5 respectively in the upcoming month.

A question then arises: which of the three consoles is the greatest?

This question has no easy answer. The Nintendo Switch has gained notoriety for its incredible console-exclusive games, which can be played on a TV or virtually anywhere else as a hybrid console, but has been criticized for being less powerful than its counterparts. The graphical capabilities of the Switch are where the console seems to falter. The Switch cannot run games that Xbox and PlayStation can due to its technological limitations, however, for what it lacks in graphical capabilities it makes up for with a strong library of games.

PlayStation and Xbox are difficult to decide over which is superior since both are so similar from the vastly different Nintendo Switch. The decision for most comes down to personal preference and console exclusives.

Xbox Series X will feature Halo Infinite, Fable, and a currently untitled entry in the Forza Motorsport series. Halo Infinite is a first-person shooter in which the protagonist, Master Chief, fights to “save humanity” as Microsoft says. The Forza Motorsport series is a popular racing series grounded in reality instead of Nintendo’s popular, wacky Mario Kart and offers a drastically different and more realistic approach to racing games.

Both consoles will feature Resident Evil Village and Cyberpunk 2077 among other highly anticipated games.

The graphical capabilities of both consoles are virtually equivalent. Both consoles are powerhouses that expand tremendously on their previous incarnations as the most powerful consoles on the market. The biggest deciding factor between the two comes down to console-exclusives, as well as a personal preference for either Microsoft or Sony.

The PS4 has gained acclaim for many of its exclusives, including both The Last of Us and The Last of Us Part II, which are two of the most critically acclaimed video games of the past decade. Death Stranding won Game of the Year in 2018, and Marvel’s Spider-Man performed well both critically and commercially. Marvel’s Spider-Man was praised for its open-world design and web-slinging mechanic, which made traveling through New York City even more fun than it was in Spider-Man games before.

The Xbox One features Halo 5 as well as several Forza racing games. Xbox has begun to make several of its exclusives available on other consoles, especially the Nintendo Switch. Xbox and Nintendo have started to form an alliance over the past few years with both companies allowing cross-console online gaming for popular titles such as Fortnite, Paladins, and Rocket League among others.

Even then, Sony and Microsoft still seem to be threatened by the success of the Nintendo Switch, which has more games that are designed for all ages rather than Sony and Microsoft’s general direction towards a more mature audience. The Switch has sold over 62 million units, more than its predecessor, the Wii U, which sold only 13 million units. Switch sales continue to rise and Nintendo has become more popular than it was in the years of the Wii U. Nintendo continues to rise in popularity with Animal Crossing: New Horizons in 2020, a game in which the player character interacts with animal villagers on an island that they can customize freely.

Overall, Nintendo, Microsoft, and Sony have had a profound impact on the gaming market and have made it what it is today. The answer to the question as to which company has the best consoles is complicated, as all three demonstrate strengths and weaknesses of their own. It’s important to take a step back from the rivalry and note just how far video games have come, and how they have changed the entertainment industry forever.