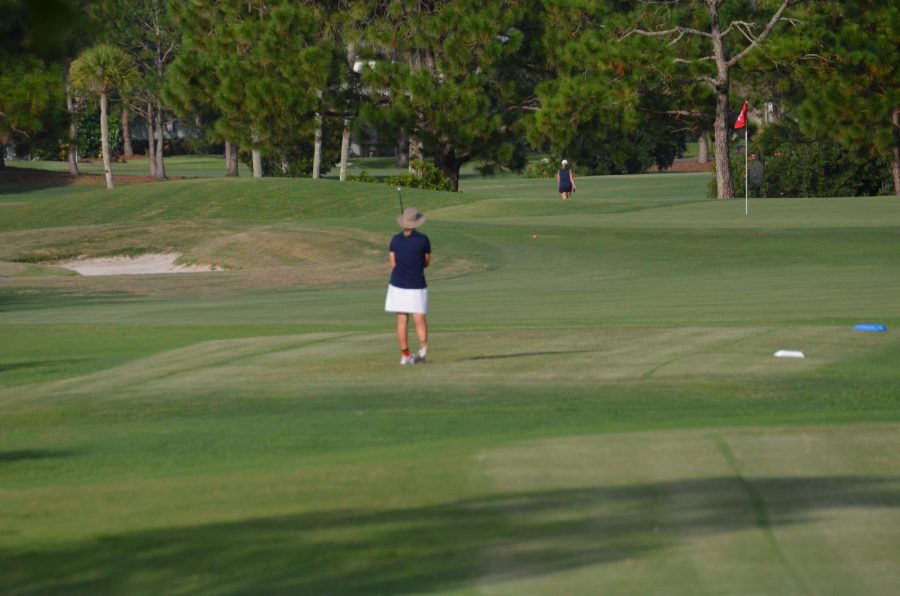 The Holy Trinity girls golf team started their season on August 23rd this year with a close match against Viera, followed by a win against Cocoa Beach and Satellite in a tri-match.

The team is led through the challenges of a new year by Emily Rotgers, the captain and only senior on the team.

The girls’ golf team has had fewer challenges with COVID than a contact-based sport due to the solitary nature of golf. “Social distancing is already happening unless you want to get hit by a golf club,” Rotgers said, “But scheduling with other schools has become a little more difficult since they’re a little more hesitant. Everything else is completely normal, though.”

The biggest challenge for the girls this season is not complications from COVID, but rather the tough competition they must face on their way to regionals.

“There’s one or two Orlando teams that have been moved to our district. Since our district is already huge, you’re already only getting a few groups who can move on,” Rotgers said. “We’re going against people who are runner up for state champs in districts and not even getting to regionals. It’s been difficult.”

“It’s a lot to try and live up to because they’re always scoring under par, which is unusual for a high school golf team. Since these teams are homeschooled, they’re being taught for golf, and even though we have a really good golf program it’s a challenge to face them,” Rotgers continued.

The golf team must also face the challenge of a larger team for this season with new players.

“A few seventh graders joined this year. We have a big team of around 15 or 16 players, and we have a lot of younger players that are returning from eighth and ninth grade,” Rotgers said. “Some of our great players left last year, but that’s always going to happen when you have good seniors because they’ve been playing the longest and will have more experience.”

The team looks to overcome the challenges this season and stay in a good mindset, remembering that golf is a slow process and the most important step to improving is perseverance.